Melissa McCarthy is on track to join Oprah’s title as Queen Of Everything.  The reason is  because she refuses to stop reaching for her personal goals.  Along the way, she’s also inspiring us to do the same.  Isn’t that the reason we crowned Oprah?  Some of you first remember Melissa from the series Gilmore Girls.  (There’s talk of doing a Gilmore Girls movie, but we’ll wait and see.)  Well Melissa has done a lot of TV and film work before and after that!  Check out Melissa McCarthy’s Wikipedia Page to see her bio.

Recently she’s released a wildly successful all-sizes clothing line called Seven7, with a powerful mission to go with it. 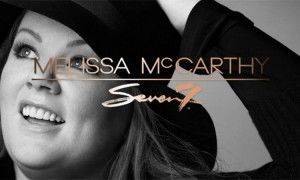 She reaches that mission with messages like this Tweet of  the female crew in her upcoming movie, Ghost Busters.  She is also raising money for St. Jude’s Research Hospital which helps children with cancer.  Here is the cute bear ornament that is sold for $15 at HSN.

She’s also in the spotlight for losing a large amount of weight.  That’s a goal a lot of us have set.  And reset.  And re-reset.  However, Melissa McCarthy isn’t doing it by buying a weight loss company, like Oprah recently did.  (Shade alert!)  Check out my thoughts on Oprah’s decision to do that!  Instead, Melissa McCarthy is winning on her own terms, and in her own time.  Because of that, she is definitely heading towards taking a spot beside Queen Oprah Winfrey.  Way to go Melissa!