Remy Ma and Papoose, the hottest celebrity rap couple in the game, were married at   the gorgeous Oheka Castle & Estate in Huntington New York.  Last week’s episode of Love & Hip Hop New York (LHHNY), we saw Papoose get down on one knee and propose to Remy Ma.  I admit I was kind of tearing up during that scene.  This is the second time the couple got married.  The first time was while Remy Ma was in prison and it happened over the phone.  Now that Remy Ma has been released from prison (after serving more than six years) she is finally going to have her dream wedding.  Sigh.  With Papoose setting up a beautiful  surprise location, the whole thing was almost too romantic to watch.  Almost!  Well, on Thursday, December 17, Remy Ma and Papoose got married.  Unfortunately there was some LHHNY drama.  But first, look how gorgeous Remy Ma is in her wedding dress!  Then check out the wedding The castle, the cake and the guests.

Other celebrities there were Ice T and his wife Coco, and Mona Scott Young.  And VH1 cameras!

Okay, so the wedding looks beautiful, but it did have some major drama!  This tea comes from theybf.com.  According to their source, Peter Gunz and his wife Amina Buddafly got into a huge fight about Peter’s baby mama Tara Wallace.  Last week we learned that Tara had moved into Peter and Amina’s building for the sake of their kids.  Umm…okay.  That wasn’t the reason for the fight at the wedding, though.  Amina is furious about Peter’s baby in Tara’s stomach!  Read my post Tara Wallace is six months pregnant with Peter’s Gunz’s baby!

Here’s what the YBF said that their source reported:

Amina yelled at Peter and said, “Why am I on birth control and why wasn’t she?!” Yes, she was referring to Tara.  Bloop!After the screaming match, Amina stormed off in a SUV!

Okay, my first question is why did Peter Gunz bring Amina Buddafly in the first place?  Maybe the invite from RemyMa and Papoose was to both of them.  My next question is, why is AminaBuddafly talking about this at someone’s wedding?  It can wait a few hours, can’t it?  Trust Amina to make a big scene so that other people could hear.  Remember, this was the same chick that sat her very pregnant ass down on the nasty sidewalk last season.  Why are cheater’s girlfriends so dramatic?  Anywaaaayzzz… CONGRATS TO REMY MA AND PAPOOSE!!! 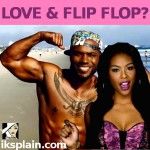